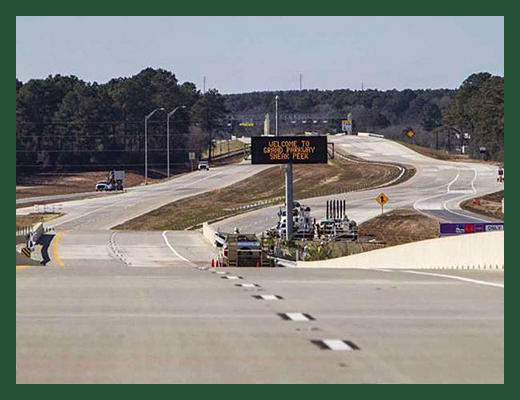 Retail observers would be hard-pressed to name a loop, high street, highway or byway in any large American market that is a bigger hotbed of retail development than Greater Houston’s aptly named Grand Parkway. When completed in 2023, the 184-mile circuit will be the largest of three regional loops, surpassing both Interstate 610 and the Sam Houston Tollway, and also the best positioned to produce the latest generation of shops, services and jobs for the region’s fast-growing suburbs and exurbs, brokers and developers say.

As large residential developments begin opening along Grand Parkway’s six completed sections — there are to be 11 sections in total — developers are adding millions of square feet of retail centers and countless stand-alone projects in the seven counties linked to the parkway, also called state Highway 99. The biggest such project, Houston-based Signorelli Co.’s Valley Ranch Town Center, in New Caney, will include about 1 million square feet of retail when it is completed, at the corner of Grand Parkway and U.S. 59, just north of Kingwood. The multiphase town center is part of the 1,400-acre Valley Ranch master-planned community. Its first retail anchors — Hobby Lobby and Kroger Marketplace — opened in late 2016, and Academy Sports & Outdoors, Burlington, Ross Dress for Less and T.J.Maxx, among other stores, came in last year. A 10-screen Cinemark will join the roster this spring.

“We want to have a variety of conveniences available right here in one place,” said Kevin Layne, a senior associate with the Signorelli commercial division. Arriving later at Valley Ranch will be a hotel, an entertainment center, an amphitheater, an aquatic center, several restaurants and a 550-unit multifamily development.

The opening of several sections of Grand Parkway created opportunities for retailers at the many new corners now serving once-isolated submarkets, says James Namken, a Houston-based senior vice president with Weitzman, which leases Valley Ranch Town Center. Grocery-anchored centers and power center developments are proliferating along the parkway, says Namken, and additional retail is sure to come along as residential density increases.

Kimco Realty, for one, is banking on the loop, having opened Grand Parkway Marketplace last spring, at Spring Stuebner Road, in northwest Houston. The 488,000-square-foot first phase contains a 126,000-square-foot Target, and the junior anchors include Burlington, DSW Shoe, Michaels, Ross Dress for Less and T.J.Maxx, plus 16 restaurants. The second phase is on track for completion this spring, but among those already operating there are Academy Sports & Outdoors, Hobby Lobby and LA Fitness.

Also making a 2017 debut was Regency Centers’ 168,000-square-foot Market at Springwoods Village complex, near The Woodlands. This Kroger-anchored center sits on the south side of Grand Parkway at Holzwarth Road, adjacent to the Springwoods Village master-planned community. Among its eight restaurants are fast-growing Torchy’s Tacos and Zoës Kitchen.

Aside from the conventional understanding that “retail follows rooftops,” some other factors driving development on the parkway are cheap land, accessibility to job corridors, strong regional incomes and new opportunities in an otherwise tight market, says Jazz Hamilton, a CBRE first vice president who represents some large local and national landlords. “Retailers and developers also benefit from better traffic flow in these suburban markets.”

Apart from the aforementioned Kimco and Regency projects, most new retail along Grand Parkway is being shaped by regional and local developers. Simon punted on 124 acres it bought for a mixed-use center in early 2014 at the intersection of Grand Parkway and I-10 in Katy, selling the land a few months later to Houston developer Parkside Capital. Parkside built a business park there and parceled off a portion for some retailers and restaurants that are now operating.

In Richmond, the new, 438,000-square-foot Market Center at Aliana, just north of Highway 59 on Grand Parkway, was handpicked by Target for its very first next-generation store, which opened there in November. The center, developed by locally based Property Commerce, includes an HEB supermarket and forms the retail anchor of the 2,000-acre, master-planned Aliana development.

Construction is under way on the Waterview Town Center, at Grand Parkway and Grand Mission Boulevard, in Fort Bend County. The 134-acre complex, a creation of Houston developer Read King, includes a newly opened HEB, a Marshalls and a Target, as part of about 1 million square feet of planned retail, plus a 266-unit multifamily complex. Capital Retail Properties’ Kroger-anchored Birnham Woods Marketplace opened last fall at Grand Parkway and Riley Fuzzel Road.

“The Greater Houston retail market reported an occupancy rate of 95 percent as of the end of last year, off by only 0.6 percent from 2016”

Among other projects in the offing is the 450,000-square-foot Grand Parkway Town Center regional power center, developed by NewQuest Properties at state Highway 249 and Grand Parkway, in Tomball. Among the proposed tenants there are Cracker Barrel, Dick’s Sporting Goods and LA Fitness.

The retail footage under construction in the Houston metro statistical area is slightly less than 3 million square feet, according to the Houston office of Colliers International. About half of that retail and half of the residential space developed in the region last year went up along Grand Parkway, according to Jason Baker, a partner of Houston-based Baker Katz. Baker has worked on numerous deals around the Loop. Moreover, most of the large-scale retail being built in the Houston area is occurring along Grand Parkway, according to Weitzman’s year-end 2017 report.

Several new corporate campuses have spurred commercial and residential development in the Loop, says Baker, such as ExxonMobil’s North America headquarters, which opened at Grand Parkway and I-45 three years ago and employs some 4,000 people.

Though Grand Parkway’s first section opened in 1994, initial planning dates back to the early 1960s, according to Baker. “For as much as the Houston area is picked on for its lack of zoning laws and ‘cowboy’ mentality, it has done a pretty good job of staying ahead with roads,” he said.

The Greater Houston economy, while still rebounding from Hurricane Harvey and an oil bust, could create 70,000 jobs or more this year, especially if crude-oil prices remain above $60 a barrel, according to a University of Houston forecast. The Greater Houston retail market reported an occupancy rate of 95 percent as of the end of last year, off by only 0.6 percent from 2016, according to the Weitzman report.

“For as much as the Houston area is picked on for its lack of zoning laws and ‘cowboy’ mentality, it has done a pretty good job of staying ahead with roads”

In the wake of Harvey flooding, several jurisdictions are editing their building codes. Harris County commissioners voted early this year to require elevations as much as eight feet higher than previously required for all new construction in some flood-prone areas — excluding Houston, for the time being. Most new regulations are being imposed using a 500-year floodplain guideline instead of a 100-year guideline, the commissioners say.

None of the new retail venues along Grand Parkway suffered significant flooding, but caution seems to be the watchword. “I’m sure everyone will pay closer attention to floodplains,” said Hamilton, with Baker concurring. “For any new development, there is a keen awareness and need to make sure we are addressing flood issues,” Baker said.

Grand Parkway is likely to be seeing robust retail construction for years to come, according to Baker. “Developers may slow things down a little in 2018 and 2019 to to let some of these new sections progress,” he noted. “But after that, we’re going to see a lot more construction, and a lot of grocery anchored centers.”