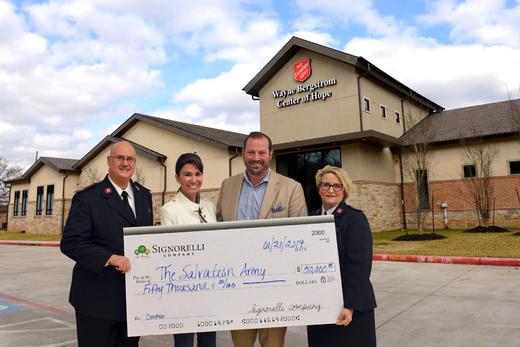 Facing a shortfall after providing Christmas gifts to about 4,630 children and senior citizens, which exceeded the expected 4,500, Salvation Army in Conroe Major Don Wildish said he faced a grim responsibility to revise the 2019 budget and services.

One of the programs at risk, he said, included social services.

“We are here to help people put their life back together again,” Wildish said. “We do that in a lot of various ways. Some are through our Center of Hope, the shelter, and others through the social service office by keeping them in their home, keeping their electricity on, so that way they do not become homeless. Social services is always an area when we have a shortfall that we have to stop and look at. It’s always an area of risk because if money is not available, we can’t give what we don’t have …”

Then, the phone rang with an answered prayer.

On Friday, Wildish sighed in relief and shared in excitement that the Salvation Army is receiving a surprising $50,000 donation that, combined with donations from the community, both meets and exceeds the goal of overcoming the at least $70,000 shortfall of its $425,000 goal that needed to be raised by Dec. 31. Now, Wildish gratefully said, the Salvation Army in Conroe will not have to change or downsize the budget to offer the services as planned.

A check will be officially presented on Monday by the donor, the Signorelli Company, which Wildish said will impact both the county and the Salvation Army in a positive way.

“I don’t take it for granted when the Lord moves somebody’s heart to sit down and write a check and to give a donation to the Salvation Army—that’s an answer to prayer,” Wildish said. “… I am very thankful to this gift of $50,000 and I am also thankful for all the friends we have here in Montgomery County that support the Salvation Army’s work in so many different ways. Saying thank you may seem like shallow words, but it comes from the depth of a very appreciative heart.

The company’s CEO, Danny Signorelli, hopes the funds will help the Salvation Army continue to serve as many people in the community as possible and that others will also continue to support the center and its services.

“As a lifelong resident and 3rd generation Conroe family, we take pride in our community,” Signorelli said. “At The Signorelli Company, we spend our time creating and developing better places to live, work and play. In a way, the Salvation Army does the same to help families in need. We were disheartened to read the shorten funds in the newspaper article for this amazing organization that help families that have nowhere to go. The Signorelli Company, my wife Angie and I are very honored to partner with the Salvation Army to help as many people as we can.”

Wildish said about 90 percent of the Salvation Army’s budget in Montgomery County is supported by direct donations from individuals and the remaining 10 percent by grants that help keep the doors open and the Center of Hope operating. He reported the center served an average of 79 people per day in 2018 and served about 28,000 homeless people from Jan. 1 to Dec. 31. The Salvation Army also served more than 3,000 holiday meals to the community in November.

Since the Salvation Army’s creation in 1865, Wildish said it has not always been easy. In fact, several Salvation Army locations nationwide also reported a shortage. And, in 2017, the Salvation Army sought $80,000 following the Christmas campaign which also would have led to budget changes had it not been for the community’s support.

Despite the challenges, Wildish plans to continue offering the Salvation Army’s services, including the Christmas program as long as possible, noting it often does not have any other source but the county to turn to for assistance.

“In 2019, that number (of people served) is not going to decrease,” Wildish said. “That number is going to increase as the population of Montgomery County continues to grow and so will the challenge of meeting the needs of people. As this county grows, so does the need, and what the Salvation Army will do is we will continue to face the challenge that is in front of us of trying to care for those who need the help of the Salvation Army.”