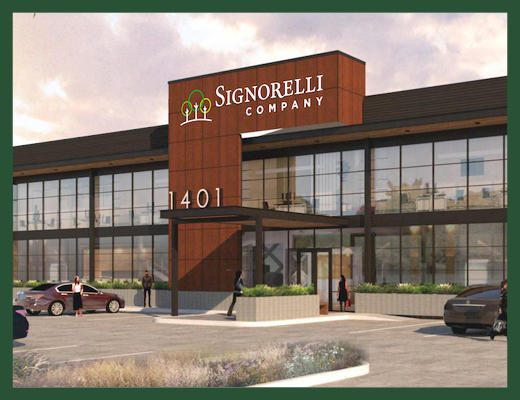 Following a growing trend of open, modern offices, commercial and residential real estate firm The Signorelli Company is diving headfirst into a green concept for its new headquarters in The Woodlands.

Signorelli is in the process of remodeling the former KM Realty building on Woodlands Parkway into a new headquarters for the company, designed by Houston-based identityARCHITECTS and executed by contractor Arch-Con.

The company isn’t going far — the new two-story, 16,000-square foot headquarters are across the street from the building where they’ve been based since 2013.

“Being in The Woodlands is ideal,” CEO and president Danny Signorelli said in an email interview. “We are still in Montgomery County, and south enough that it’s an easy reverse commute — many of our team members live in Houston.”

The original building was built by Keller Williams in 1999, but the reimagined open-concept office will bear little resemblance to it. Signorelli’s new headquarters will be a glassed-in, outdoor paradise for the 71-person staff, featuring more than 4,000 square feet of green and outdoor spaces.

The inspiration for the glass-and-green design is the wooded yet modern setting it will call home, Signorelli said in a release, and the new, enlarged site, will allow the company room to grow.

As for the location, Signorelli said, it only made sense for the company to remain in the community it’s called home since its founding in 1994. Staying put also puts the commercial side of the business at an advantage — the county is among the top 20 fastest growing in the state, and has been for a while.

“I am third generation (resident of) Montgomery County,” he added. “So it’s a location that I am proud of.”

The new headquarters are expected to be finished in the second quarter of 2019.