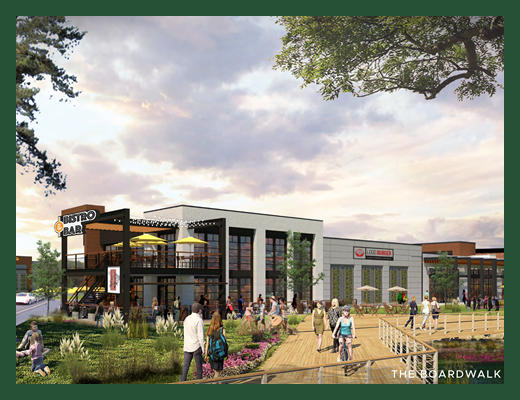 Article by The Houston Chronicle

With many of the stores and restaurants in the Valley Ranch Town Center already completed or under construction, its developer Signoreli Co. is shifting its focus toward their next phase — an entertainment district.

The new district will give mixed-use development Valley Ranch more regional appeal when most of the new restaurants and stores open 12 to 18 months from now, said vice president of the retail division, Brody Farris.

“We have seen that our retailers, restaurants are drawing from a much larger trade area than they typically would in other settings. And that’s mainly created by sitting on the corner of the Grand Parkway and highway 59. We’re pulling people into our restaurants all the way from Shepherd and Cleveland,” Farris said.

“Same goes to the west and east. We’re pulling from Kingwood and the Humble area, and that’s only going to expand with the construction of sections H and I of the Grand Parkway. We’ll be serving the communities of Huffman and Dayton and Liberty that currently don’t have a lot of these offerings in those areas.”

Signoreli Co. believes demand is high for more entertainment options in the area, evidenced by other options cropping up, such as the 600-acre theme park Grand Texas, H-E-B anchored Main Street in Kingwood and mixed-use development Generation Park near Summerwood.

“Any type of offerings that are in the area, whether it’s Grand Texas or our Town Center or boardwalk that brings people into the community, it helps. We feel like we can feed off of everybody,” Farris said. “There’s enough traffic and activity and demand that we just have to have a reason for them to be here.”

A big piece of the planned entertainment district will be the boardwalk, which overlooks two lakes that are adjacent to the Cinemark movie theater, which opened last spring, and The Pointe, a multi-family development under construction within the district, Farris said.

At buildout, the boardwalk will feature 30,000 square feet of restaurants that overlook the lake near Valley Ranch Parkway in addition to fountains, trees and other restaurant pads.

The boardwalk may remind visitors of a trip to The Woodlands area, though not the Waterway on Market Street. Farris said the boardwalk will have a similar setting to mixed-use development Hughes Landing, a 66-acre town center along Lake Woodlands that features Whole Foods, entertainment venues and multiple Class A office buildings.

“As you’re sitting on one of the restaurants, you’re out there at the bar having a drink or eating crawfish or having a burger is looking over something more in line with what you’d have at Hughes Landing or Town Lake in Cypress.”

The developer is currently pre-leasing its first two office buildings.

The first will be a 60,000 square foot Class A facility with ground floor retail and restaurant space. The second will be an 80,000 square foot building. Signoreli is currently negotiating with potential anchor tenants, he said.

“Our focus is to provide a better place to live and with the help of our wonderful team, we’ve created something here that is among the finest multi-family projects along the 59 corridor,” said Danny Signorelli, CEO/president of The Signorelli Co.