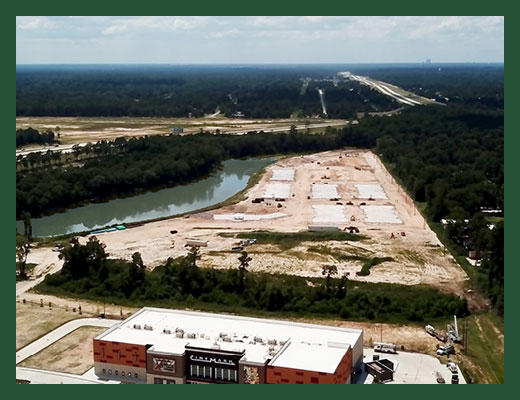 The Signorelli Company held a ground-breaking ceremony Thursday for a 456-unit multifamily development at Valley Ranch Town Center, located at the intersection of Hwy. 59 and the Grand Parkway in New Caney.

Construction on The Pointe is already underway, and the first 336 units of the development are set to open early next year. The remaining 120 units are set to open in the middle of 2019, according to a press release.

Interested residents can begin preleasing units 90 days prior to the completion of the first phase of units. According to a press release, the development will include one-, two- and three-bedroom flood plans.

The Pointe is the latest addition to Valley Ranch Town Center, where numerous businesses have opened this year, including Toasted Yolk Cafe, Pizza Cucinova and a Cinemark movie theater.

Danny Signorelli, The Signorelli Company CEO and president, said The Pointe is the first of six multifamily projects to develop plans to build within Valley Ranch.

“Ultimately, we think we’ll have 2,000 units within the 1,400-acre overall project, which will put a lot of density and a lot of daytime and nighttime numbers for us,” Signorelli said. “It will really support some cool things that we have designed in restaurants, bars and boutique vendors that will be excited to be around here.”

Amenities at the development include a swimming pool, dog park, outdoor fire pits and fitness and business centers. Additionally, the development will be located next to a lake with an open beach where residents can kayak, paddleboard or fish.