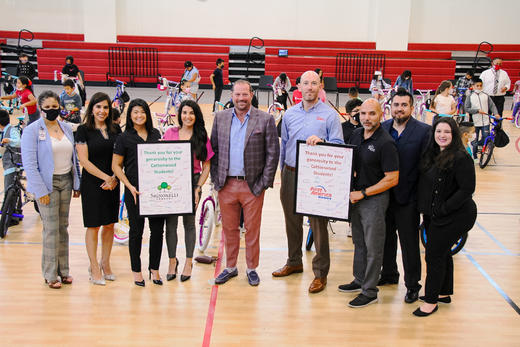 First America Homes, the homebuilding division of the Signorelli company, has teamed up with Cleveland ISD teacher, Tracy Spears, to reward her 2nd and 3rd grade students with new bicycles, just in time for summer.

Spears, RTI Specialist at Cottonwood Elementary, started the campus’s participation in a national program for struggling students called ‘First in Math’. The pilot program rolled out in October 2020 and is focused on helping students practice math in a fun way, while being rewarded with pizza parties, recognition, and the opportunity to be crowned as Math Queen/King every week.

“The students have excelled and their progress was shown on our last district test. These amazing kids had the highest math scores in the district!” said Spears. “With students participating before and after school this year, they have solved well over one million math problems.”

Spears, who has been an educator for 26 years and is finishing her first year with Cleveland ISD, challenged students to continue pushing for the 2 million math problem milestone by the deadline in July. Currently Cottonwood Elementary has the top third-grade math team in the entire state of Texas and four Cottonwood Elementary teams scored in the top 25 teams for the state. Ms. Christiana Chavez’s third-grade class earned the top spot in the rankings.

Spears came up with the idea to reward top achieving Cottonwood Elementary students for their efforts with a bicycle and helmet.  Because of the huge success the program has seen, more and more students have become top achievers.  Spears decided to reach out to local businesses in an effort to get a single bicycle donated.  When the request came through, the local homebuilder chose to do more.

“At First America Homes, we are building homes in many of the Greater Houston area suburbs.  The kids in our schools are important to us, and we are excited to not only give back, but also to invest in the future of Texas, the children and teachers like Mrs. Spears,” said Dave Barnhart, Division President for First America Homes.

Danny Signorelli, CEO of the Signorelli Company, echoed Barnhart’s sentiments. “The Signorelli Company and First America Homes takes pride in our impacts on the community.  When we saw this teacher going above and beyond, we couldn’t help but step up and recognize her for her excellence in the most critical job we have! Education is our future.  God Bless Mrs. Spears for caring and going the extra step to make a difference in the children and our future.”

Signorelli added that donating the bikes was the easy part.

“Math and science are critical for these students. The results that Ms. Spears has been able to get are just amazing,” he said.

A total of 64 bikes were distributed with First America and the Signorelli Company purchasing 24 of them. Funds to purchase the rest of the bikes were donated by Fish Tales, Colony Ridge, Texas Farm Bureau-Baret Stephenson, Casas Houston, El Timador, Fat Floyd’s Smokehouse and Martin Chevrolet.