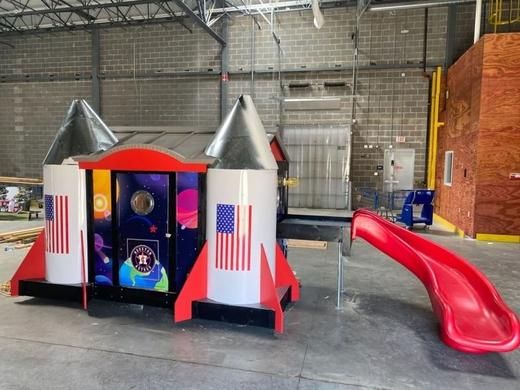 A state-of-the art, space-themed playhouse designed by First America Homes is being raffled off to raise funds for HomeAid Houston, a charitable arm of the Greater Houston Builders Association that serves the local homeless population.

This is the 14th year for this fundraiser, a joint effort between HomeAid Houston and the Houston Astros Charitable Foundation, which tasks a local builder with creating an over-the-top child’s playhouse.

“If I could paint you a picture of these developers and their architects huddled together . . . it’s like they transform into 10-year-old boys,” Carole Brady, executive director of HomeAid Houston, told Houston Agent. “The builder really gets to play with his imagination.”

Normally on display at Minute Maid Park, due to COVID-19 this year the playhouse will go straight from its secure facility at the Woodlands to the raffle winner.

Founded in 2003, HomeAid Houston builds transitional shelters for nonprofit agencies that provide services and support to men, women, children and veterans facing homelessness. So far, the organization has completed 54 projects in the Greater Houston area, adding more than 1,500 beds and $14 million in real estate construction and improvements to help Houston’s homeless community.

In addition to buying raffle tickets, agents can also support HomeAid Houston through hands-on help at project sites or by donating a small portion of their closing fees to become a “HomeAid Hero.”

“It’s a really cool program and 100% of the money goes to our projects” said Brady.