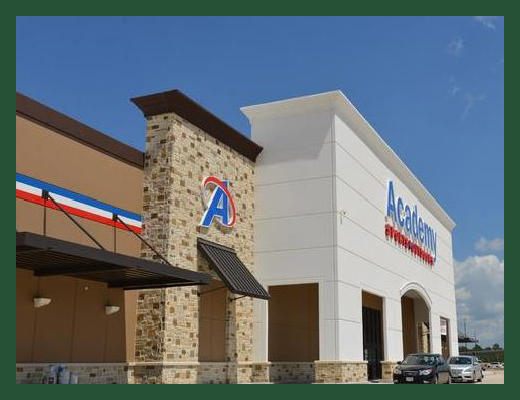 Academy is the first store to open in Valley Ranch Town Center, which is being developed by The Signorelli Co. The 1.5 million-square-foot mixed-use development sits on 240 acres in the north part of Valley Ranch, a 1,400-acre master-planned community north of Kingwood.

Valley Ranch Town Center, designed by Houston-based CDA Architects, will ultimately feature more than 120 stores as well as a high-end movie theater, a bowling alley, arcades, a fitness center and several high-class restaurants, such as a steakhouse. The major tenants — Kroger Marketplace’s 123,000-square-foot grocery store and Sam’s Club — are expected to open between October and early 2017.

Academy has been in expansion mode around the Bayou City. In July 2015, the company announced it was planning to open three locations and create 300 jobs in the Houston area that year.

Academy is Houston's third-largest private employer, according to Houston Business Journal research. It has around 5,800 employees in the Bayou City area.

The $4.6 billion company company operates more than 210 stores around the U.S., according to a release.