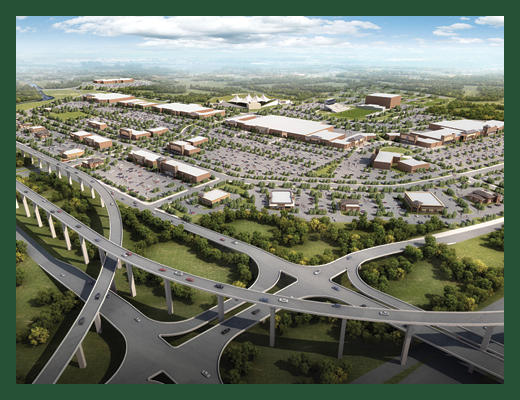 The Signorelli Co. has set opening dates for Valley Ranch Town Center, the largest retail project under construction in the Houston area.

The Woodlands-based developer broke ground in April 2014 on the 1.5 million-square-foot mixed-use development, which sits on 240 acres in the north part of Valley Ranch, a 1,400-acre master-planned community north of Kingwood.

The remainder of the major tenants — Kroger Marketplace’s 123,000-square-foot grocery store and Sam’s Club — are expected to open between October and early 2017, Signorelli said.

Valley Ranch Town Center, designed by Houston-based CDA Architects, will ultimately feature more than 120 stores as well as a high-end movie theater, a bowling alley, arcades, a fitness center and several high-class restaurants, such as a steakhouse.

“The reality of our Town Center gives people a better understanding of how dynamic Valley Ranch is,” Signorelli said. “We’ve already seen an uptick in home sales. Next year will be a record year for us.”

In the end, Valley Ranch will also transform the sleepy northeast Houston suburb into a regional destination, Signorelli said.

“What drives retail is the rooftops,” Signorelli said. “This northeast corridor already had an incredible amount of rooftops, but it was kind of overlooked compared to the northwest and southwest. But we have 175,000 people living here with an average household income pushing $90,000. These are phenomenal numbers. With this kind of population and so few services, it’s a no brainer for these retailers to come to Valley Ranch. It’s a win-win in one of the most dynamic growth areas in all of Houston.”